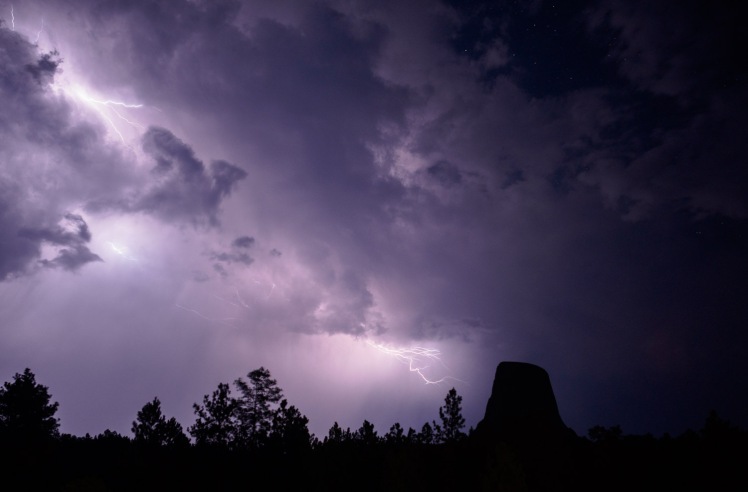 “What if I came to your church while you were trying to worship, and climbed on your steeple?” This question was posed to me recently, and I tried to take it at face value. It seemed like an entirely reasonable analogy, at least for those of us who have ever practiced religion in a “church.”

The Shoshone Medicine Man who asked it was giving a presentation at the campground ampitheater here at Devils Tower, and unsurprisingly, the issue of climbing access in June had come into the fray. Before this however, I listened to him speak in pained tones of the state of Shoshone and Arapahoe nations around Wyoming, specifically on the Wind River Reservation. He told the eclectic group of vacationers, park service officials, recreational climbers and guides about young men from his tribe hunting game on the reservation, only to then take their meat across the boundary to exchange it directly for Methamphetamine. He gave us all a rundown of the amazing profits being made from liquor stores continuing to pop up right across the border of the dry reservations, and how the advent of modern societal vices make money off the addiction that afflicts his people.

After listening to what he had to say, I felt a bit sheepish that I had come to hear him speak with the intent of understanding his personal thoughts on what we do as climbers at Devils Tower. Why is it that our community has been so focused on whether or not we choose to obey the closure, when so many greater issues exist? Nonetheless, I had questions he might possibly have the answers to, and wanted to at least have some kind of dialogue opened between our two groups. I approached him after he had finished his presentation, and asked if he might sit down with me to talk. I told him why this place in the middle of nowhere, where people come from everywhere, is so special to us as climbers. I wanted him to know what keeps us coming back year after year, that the continued upkeep and protection of the Tower was of paramount importance to us as well. I wanted to tell him about the feeling that I get walking up the talus to the west face, looking up at dozens upon dozens of endless cracks. It’s in that moment that I know I have the chance to truly choose my own adventure in an unequivocably unique setting, unmatched by anything I have seen or climbed before.

If there is one group of people who can even come close to capturing the real spirituality that the American Indians have for a place like this, I hope it’s climbers.

After fumbling over my words for long enough, trying to explain why we climb, and how dear we hold this place, he told me that we have similarities in our relationships with this place, or in its relationship with us. He mentioned his belief that all peoples have a calling from places like these to engage, not necessarily in religion, but in spirituality and tradition. That we have a duty to learn about our ancestors before us, how they lived and the culture they created and passed down to us. Above all though, he told me to be respectful. The Creator, in his words, bestowed a gift to us, one that is our responsibility to protect, but also to enjoy spiritually. He wanted to make sure that we are respectful to those Natives who do come, in all months of the year, to practice their spiritual relationship with this place, whether it is by fasting, ceremonial dances, or vision quests. These intensely personal and private rituals are not done for show, and if you come to the Tower, it’s likely you won’t ever see any evidence, save for prayer flags and bundles tied to trees above the paved trail that encircles the Tower. Some are new, only from this past season, others have been up as long as I have been coming here. But when new bundles show up where there weren’t any a day or so ago, it’s plain as day that these ceremonies do continue to go on. I was asked to give respect and privacy to those areas, and just climb somewhere else on the Tower. Having a National Monument as a home crag with 360 degrees of climbing around it leaves me with plenty of options.

What I gained from a conversation with man was enlightening, and not simply about how to share a place that many people hold sacred. It spoke volumes that he wasn’t there to give a presentation about the closure, or even about the Tower. He was there to share information about his culture, create dialogue, and hopefully dispense with misconceptions. He cared about the well-being of his people, and was truly concerned for their future and the modernization of such traditionally rooted cultures. This was one man, and it would be irresponsible for us as a community to take any one person’s word as gospel, especially on a divisive issue like the closure. The more that I learn about it, and become immersed in the local culture here, the more this issue stops being black and white, and deepens in its shade of gray.

As someone who spends a season here each year, I feel it is a privilege and duty to learn how everyone, especially locals, feel about this place, and what it specifically means to them. The spread of information and creation of relationships between every part of our communities is the one thing that I believe will help to form common ground around this special place.

I was on top of the Tower one evening, just around dusk. The weather was beautiful, and temperatures were cooling with the leaving sunlight. The air was reaching that perfect balance where the light breeze around is crisp but clothes and gear are still warm to the touch, the body in that wonderfully warm but refreshing state that only clear a summer evening brings. My client was finishing up the 4th class chimney pitch to the summit, and I was enjoying the views, simultaneously pulling rope and untying shoes, trying to free my now heat-swollen toes. Two young peregrine falcons appeared in the distance, offspring of the one resident family we pick up every spring, that seem to love the nesting opportunities on the Tower. As the two young raptors moved closer and closer to where I was, it became clear that they weren’t out that day to help control the rampant pigeon population. They chased and swooped each other, continually heading my way until they seemed to dart back and forth right in front of me, clearly enjoying the audience enraptured by their aerial acrobatics. Having this amazing display of local nature and perfect weather on the summit, after facilitating another person’s lifelong dream of making it to the top of this incredible volcanic rock formation, I felt a strong sense of inner peace. It was truly the most spiritual experience I’ve ever had in my life.

This is why I came to the Tower three years ago. I didn’t come to form political opinions on exceedingly difficult and complicated issues. I didn’t come to trivialize other’s beliefs, or criticize people on the choices they make here. We as people are inundated with choices in our short time on this earth. We make choices the best we can with the information we have, and these choices are critiqued and judged by everyone with whom we interact. And yet that shouldn’t alter our choices; our choices are our own. Some make the choice to sit in an office day in day out; some live on the road, as far from “modern” civilization as possible. Some choose to have a family and put down roots; some choose to take life as it comes, doing it solo.

I chose to come to Devils Tower. I came because it called, and I came to climb.

4 thoughts on “A Conversation, Closures, and Choices”